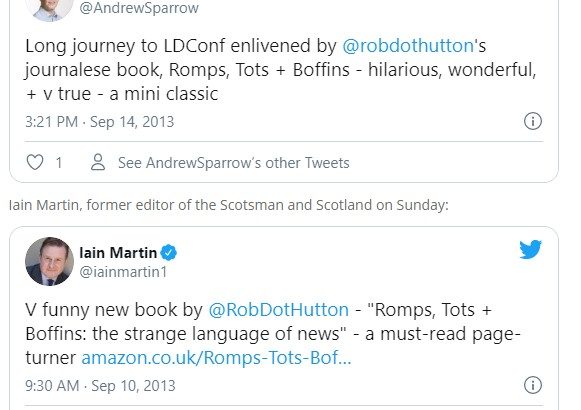 Romps, Tots and Boffins has been selected as a Book of the Year in the Spectator, the FT, the Times and the Sunday Times.

Here’s some of the things people have been saying about it:

Matthew Parris, The Times:
I’m loving a little book just out by my fellow political journalist Rob Hutton. It’s called Romps, Tots and Boffins: The Strange Language of News but is so much more than a hilarious compendium of the ghastly cliché to which our trade is prone. My favourite among Hutton’s definitions illustrates language’s ability to warp the meaning we take from what we read:

After: we will now imply a link between two events that may or may not be related. Or try “ahead of”, “comes as” or “in the wake of”.

Amid: may be appropriate if “after” or “in the wake of” aren’t.”

Ann Treneman, The Times:
“An essential guide to finding out what you are reading about. Some people may dismiss this as a ‘loo book’ but, actually, it’s so much more.”

Matthew Engel, the Financial Times: “Romps, Tots and Boffins has the look and feel of a Christmas potboiler, though it is much funnier than most.”

Libby Purves: “great joy from Robert Hutton’s Romps, Tots and Boffins. Never has the weird language of headlines been so wittily defined.”

Nick Robinson:
“A fascinating code-breaker of the cliches, inanities and banalities which fill our newspapers. Or, if you prefer, ‘News Secrets Revealed Leaving Bosses Shamefaced’. I’m not sure I dare write another word.”

Iain Martin, former editor of the Scotsman and Scotland on Sunday:

If you read one book on journalistic cliches this year, make it this one by @RobDotHutton. It’s an enjoyable romp… http://t.co/4CCDsAgqHM — Valentine Low (@valentinelow) September 10, 2013

just finished @RobDotHutton‘s hilarious book on journalese, laughing out loud on the train – so many favourites but top 5 would include (1/2

it has just emerged, the BBC as learned and (my fave) a wide-ranging interview (2/2)

Don’t understand what journalists are on about? Get a preview of @RobDotHutton‘s brilliant new book on Journalese http://t.co/Esm62uUKrR

@robdothutton Oh good, feared we might have pushed the joke too far with that one. Loved the book, every journalist should read it!

Journalism explained. I’ve never used any of these. Ever. http://t.co/p3kgQbUozY

By the way, @RobDotHutton‘s “Romps, Tots and Boffins” http://t.co/f1H0Q41w39 is indeed both “laugh-out-loud” & an essential media de-coder.

This book by @RobDotHutton on #Journalese is as hilarious as anticipated. Believe the hype @eandtbooks pic.twitter.com/6nekk1PXsH