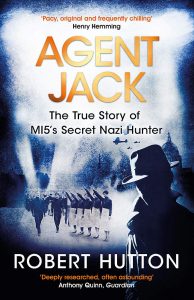 Agent Jack is in the shops now. It tells the astonishing true story of how, during World War II, MI5 fooled dozens of British fascists into thinking they were spying for Germany.

The story has inspired two novels: Kate Atkinson’s Transcription and Anthony Quinn’s Our Friends in Berlin. But the truth is as remarkable as any work of fiction.

In the U.K., get it at Waterstones, Amazon or your local bookshop.

In the U.S., it’s at Barnes & Noble, Amazon and plenty of other places.

“An appealing mix of accessibility and research. [Hutton] has illuminated a fascinating and often appalling side of the war at home.” ― Wall Street Journal

“A gripping book by a talented new spy-writer which illuminates a shocking episode in our wartime history. Fans of Ben Macintyre’s books will love this” – Tim Shipman 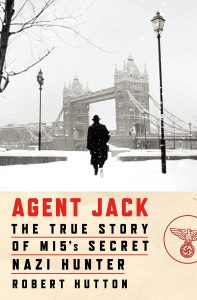 “I have never encountered a stranger or more touching picture of real-life treachery: the exciting and the humdrum, the venality and the idealism, the incompetence and the expertise … and all the while the cocktail of high-octane subversion and the low-octane muddle of workaday life. Robert Hutton is an ace researcher but, more than that, a keen and kindly student of real people” – Matthew Parris

“At a time when antisemitism is once more rearing its ugly head, this fascinating and well-researched book gives us a salutary reminder that Britain is not immune to homegrown fascist treachery” – Tony Robinson

“We think we know the story of the Second World War, in which Britons were unambiguously on the side of good against evil. But along comes Robert Hutton to show us that that narrative, while comforting, isn’t exactly true. We had our own fascists here, eager to do all they could to help the Nazi enemy. In this surprising, even shocking book Hutton tells the extraordinary story of Hitler’s British friends – and the unlikely man who did so much to stop them. It’s a truly compelling tale” – Jonathan Freedland